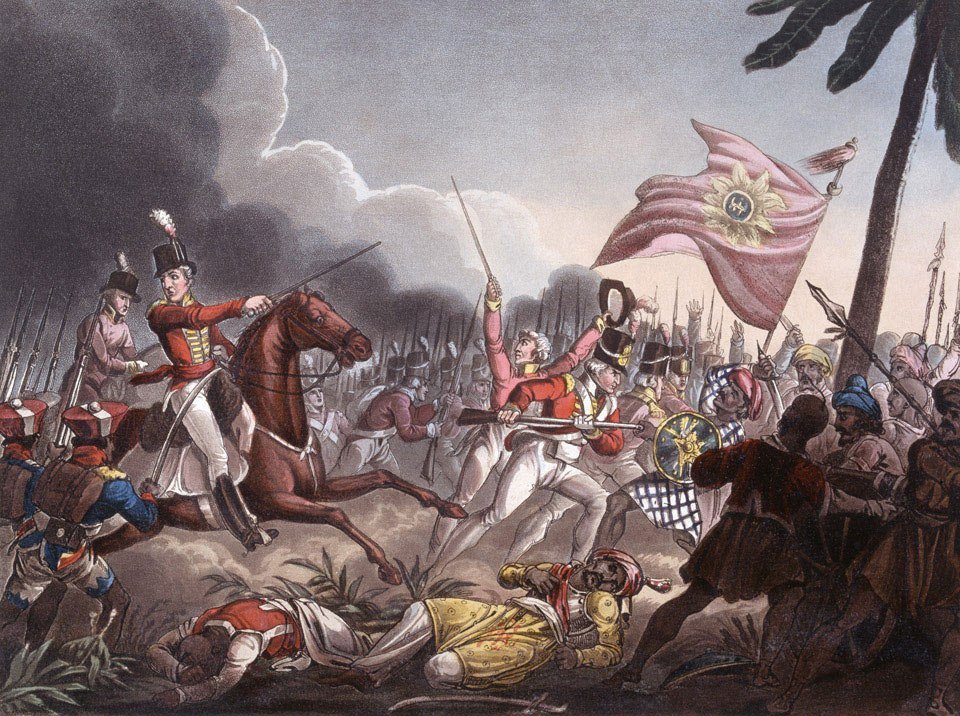 History includes many events which helped in the evolution of a nation, society, and mankind as a whole. That’s why battles are important. They destroy the old and lead a path to a new beginning.

India has a long history. Many rules ruled on Indian soil. Some tried to make the country, some tried to break it. However, the people of this subcontinent proved to be the fighters. Their strength and courage are always glorified. It might not always be as the Indian and the others, people living here have been fighting outsiders even before there was a concept of the ‘nation-state’. Here is a list of 15 battles on the Indian soil, which shaped Indian society, culture, economy, and polity.

It is the oldest reference of war in Indian history. We get the mention of this war in the Rig Veda. As the Rig Vedic age was a tribal society that consisted of Aryans, it was a battle among 10 chieftains, which took place beside the river Parushni or Ravi.

2.WAR BETWEEN DHANANANDA AND CHANDRAGUPTA :

This war is important because it led to the establishment of the Great Maurya dynasty. Chandragupta Maurya defeated Dhana Nanda, the last king of Nanda dynasty and cleared the path to establish Mauryan dynasty. Mauryan dynasty brought so many changes in Indian polity and society which are considered remarkable. The famous politician Chanakya helped Chandragupta to win the Battle.

This war ended in 262 BC. It was fought between the Mauryan Empire under Ashoka, and the feudal state of Kalinga. Kalinga war is important because the devastation of war made Ashoka realize the negative sides of a battle. So he embraced Buddhism and the policy of non-violence afterwards.

These two battles were fought between Muhammad Ghori and Prithvi Raj Chauhan, known as the’ the last Hindu king’, in 1191 and 1192. As a result of this Taraori war, Prithvi Raj Chauhan died in 1192 and it was the beginning of Muslim rule in India.

Panipat’s battles are the most influential battles of Indian history. The first battle of Panipat took place in 1526, between the Last ruler of Delhi sultanate, Ibrahim Lodhi and the Turkish Babur. It was the beginning of the Mughal rule in India. For the first time, canon and gun powder were used by Babur in an Indian battlefield. Moreover, it changed the whole socio-economic policy in the Indian subcontinent. That’s why Mughals are considered to be one of the greatest dynasties ruling over the Indian subcontinent.

Through this battle in 1527, Babur established the Mughal empire, by defeating Rana Sanga, the king of Mewar. Rajputs were the biggest power of India, fighting against the Mughals. After this battle, Babur started conquering the Rajputs and included their land in the Mughal kingdom. Bubur took the title of Ghazi after this battle.

A battle between Humayun and Sher Shah Suri in 1539. Shershah Suri was victorious in this battle.

The battle of Kannauj was an important battle between Humayun and Sher Shah Suri. This is the second battle between the two warriors. After the victory of Sher Shah Suri in this battle of 1540, he led the path to establish the Sur dynasty in India, defeating the huge Mughals. Sher Shah’s rule was important because he improved the agricultural system and communication system in India. Later, the throne of India was again won by the Mughals but his revenue policy was practiced by Akbar.

Battle of Panipat 2 took place in 1556 between Bairam Khan and the Afghan ruler Hemu. Akbar’s force led by Bairam Khan became victorious in this.

This took place in 1576 between Maharana Pratap and Akbar. Akbar defeated the Rajput king in this battle.

This battle took place in 1671, between the Ahom kingdom and the Mughal force led by Man Singh. Mughals could not occupy the Assam region because of the weather and guerrilla war technique used by the Ahoms which they were very unfamiliar with. Mughals fell sick due to the weather and these people living in plains were not very familiar to hills.

This last battle of Panipat happened between Afghans and Marathas in 1761. Afghan ruler Ahmad Shah Abdali was victorious in this war.

This is a battle fought in 1757, between the Nawab of Bengal and British force led by Robert Clive. The East India Company extended its mercantilism to Bengal after the victory in this war.

This can be seen as the route to Modern Indian history as it was formally the last try by different Indian rulers like Durani, Nawab of Awadh and Mir Qasim to keep their territories safe from the British. However, again the East India Company won and the treaty of Allahabad was signed. So, the British company rule started after this war in India.

Thus, India became a colony and after almost 200 years of British rule, India became independent on 15th August, 1947. These 200 years witnessed lots of struggle and bloodshed.