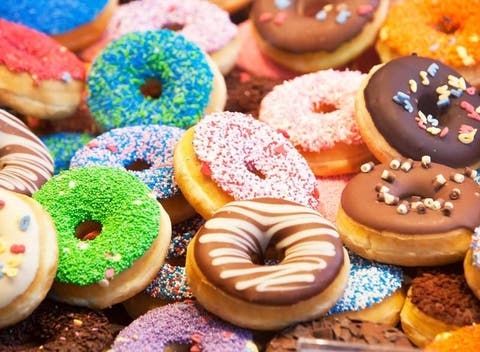 Top 15 Outlandish Donuts In The World

Donuts are something we all love and relish. These sweet snacks tend to steal the hearts of everyone who tries them. However, there are some weird and outlandish donut flavors that you need the courage to try! This is a list of the top 15 most outlandish donuts in the world ever created.

A sushi donut is basically sushi and shaped like donuts. These have blown away social media with the creativity and storm. It’s colorful, fun, and different. Moreover, it is also a healthy food.

Voodoo doughnut, located in Portland serves the most unique, yet lip-smacking donuts flour ever. “The Double Bubble”, is one of the best outlandish donuts available in Voodoo. Covered with bubblegum icing and topped with an authentic double bubble tootsie roll, this donut is definitely a must-have!

Strange Donuts, St. Louis, MO, as its name suggests, always comes up with the strangest donut flavors. Chicken and Waffle Donut is one of them. These donuts are topped with fried chicken and waffles and drenched with maple syrup.

Donuts shaped like shot glasses and filled with liquor; this is what makes the Shot glass donut a unique thing. Just put a hollowed-out donut hole in your shot glass, before pouring your drink, and enjoy the full strength alcohol with a donut twist.

Donuts and Pizza! Now imagine both of these delights in a single dish! Topped like a pizza, with olives, jalapenos, and the peppers, and then filled with rich cheese, this pizza donut will satisfy your craving for both donut and pizza.

Poi is a common Hawaiian starch paste from the purple taro root. The paste gives the donuts a sweet flavor, wonderful texture, and vibrant color. These donuts are available at the Kamehameha bakery, Honolulu, Hawaii.

It may not be available in crazy flavors, but what makes this donut outlandish is its weight and size. Also known as the Round Rock donut, from the Round Rock, Texas shop, this donut weighs over 2 pounds!

Available in Donut House, Chennai, India, southern spice donuts are one of the outlandish donuts flavors one could ever imagine. It is topped with southern spices, green chili, and thyme. This donut undoubtedly secures a strong position in this list.

Glam doll donuts have been a loved for the diversity it brings out in its donuts. Its exclusive mac and cheese donuts are essentially macaroni and cheese, rolled in bread, shaped into a donut, and then deep-fried. It’s a dream come true for all cheese lovers.

Dunkin Donuts, Korea, has come up with this unique idea of the outlandish donuts. This donut is filled with Korean fermented cabbage, known as kimchi. It is also filled with shredded pork sometimes.

Ramnut is one of the weirdest food hybrids ever. This unexpected fusion comes from Josh Scherer of Culinary Bro-Down. Ramnut is available in various flavors and is made using Ramen, unlike the traditional donut.

Also known as The Luther Burger, this donut is combined with a bacon cheeseburger, plopped with a fried egg on top. The donut, split into two, acts as the bun. This donut is named after the entertainer Luther Vandross, who created the burger at the backstage of his show.

This is a fusion between the airy-light croissant and the glazed sweet donut. This unique delicacy is so popular that a black market around this delicacy has formed. This combination is not only outlandish but also marvelous.

Introduced by Psycho Donuts, makers of some of the weirdest donuts have come up with psychobugs, donuts topped with edible bugs. As much bizarre the ideas sounds, these donuts were originally made for the National Donut Day, 2012. The Chirp Derp, as it is known, is topped with bacon bits, bacon-cheddar crickets, and milk chocolate.

With dried and dehydrated pork as a topping, and also some seaweed pieces, this donut might be uncomfortable for the traditional donut lovers. However, in China, Dunkin’ satisfies its customers by serving this as a less sweet and treat and a savory snack for those who don’t have a sweet tooth.