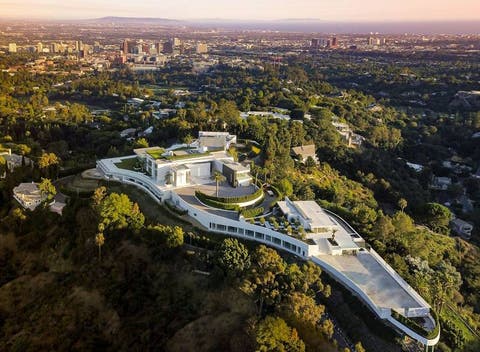 Situated in the city of dreams Mumbai, Antilia is surely the house of everyone’s dream. It is owned by the wealthiest person in India Mr. Mukesh Ambani. The cost of the skyscraper will surely blow off your mind. It is approximately 2 billion dollars. The skyscraper extends to the area of 4 lakh square feet. A tower of the same height should have at least 60 floors but the Antilia has only 27. This clearly shows how spacious the villa is. The house has a car service station, ice cream parlor, a ballroom, helipads, and a temple all within itself. It also has a theatre made to accommodate 80 people. Additionally, it has parking to harbor at least 168 cars. The house set an extra-ordinary standard for luxury.

Located in France, this magnificent villa is owned by Lily Safra. It was originally built in the year 1931, but at present, its value is 400 million dollars. The main section of the villa is said to have 19 opulent rooms. Moreover, it has 14 bathrooms and several terraces that give us an exotic view. Garden of the mansion extends up to 8 hectares it is decorated magnificently with olives, lemon, and orange trees. It is located near French Riviera making it a perfect blend of luxury within nature. The total area of the mansion is 10,245 square meters, which is equivalent to 28 enormous football pitch. The villa even has its own sports court, theatre, and bowling alley.

Located in the Sagaponack village in the US, Fairfield is the House to Ira Rennert. Expands to the area of over 63 acres, and is said to be the largest home in the US. It embodies 21 bedrooms and 18 bathrooms which are filled with grandeur. Besides it also consists of 12 chimneys and 91-foot long dining room, basketball court, two-lane bowling alley, two tennis courts, two squash court, and also a billiard room. There is also a grand 164 seater theatre and splendid garage to hold up 200 cars. But what’ mind-blowing is that it has a hot tub that costs approximately $150,000.

Located in the first city of England London, One Hyde Park is owned by Project Grande (Guernsey) Limited. It is three floors of luxury development that were combined to make a penthouse. It is built with a 360° glass facade to ensure a pristine view of the London city. It is embraced by a 21-meter long swimming pool, private cinema, and two wine cellars. It even has its concierge services adding up to the easement. It also has a distinct feature of heated marble floors ensuring comfort for their residents.

Located in the square mile the consultant palace mansion belongs to Tamara Ecclestone. The major highlight of this palace is that it is just Street across from the residence of Duke and Duchess of Cambridge’s home at Kensington Palace. The palace has around 57 rooms in total. The kitchen is designed intricately, keeping into consideration the grey theme. The hallway includes a monochrome color scheme. The house has its miniature version which was gifted to Sophia, Tamara’s child as a birthday gift. The enormous palace also has a bathtub made up of pure gold.

43 billion dollars worth Ellison state is based in Woodside, California. The owner of the luxurious site is Larry Ellison. He has converted the 23-acre estate into a 16-century Japanese emperors palace. It took him nearly nine years of blood and sweat to design and construct this masterpiece. It is a 7 bedrooms and 7 bathrooms mansion accompanied by an excellent landscape. The landscape comprises of Japanese gardens, ponds, waterfalls, and a koi pond. Inside the estate also exists a dark bottom swimming pool and an in-ground spa. Well, it does not end here, the estate also has a master suite and two-bedroom. The estate is surely a fairyland coming to life.

The London-based villa has a huge name attached to it, Roman Abramovich – the owner of the Chelsea football club. The villa is abundant in richness, it has its auto museum, health center, and of course a tennis court. The five floored palace comprises of 15 bedrooms. It is surely the most desirable address because living on the billionaire’s row adds its own luxurious flavor to life. Before, it was home to the Russian Embassy. Sir Roman has various plans for making the house more prestigious. He thinks of making the playroom and the dining room even more huge.

Boosted by Ken griffins and situated on Palm beach Florida Blossom estate is the most valuable home in Florida. The 33,500 square feet mansion incorporates two swimming pools. It provides the most astonishing view of the Florida fountains. The estate is 8 acres broad, the house itself is of 1 acre that is extending the length of a football field. The house cost 130 million dollars making it the biggest deal ever in Palm beach. But the ocean to lake property makes each dollar worth it.

This 30 bedrooms and 40 bathrooms resident is situated in Los Angeles California. Within the residence lies two ponds, a swimming pool, a tennis court, and beautiful lawns. The mansion is also a movie star as it has been featured in movies like Godfather. The glorious ballroom and library can accommodate up to 1000 guests. The dining room can seat up 400 people. Beverly Hills mansion is without fail a DREAM house.

Well, it is the home to the richest man in this world Mr. Bill Gates, shortly the most unique house amongst the all. The 66,000 square feet house is surely the most high- tech house ever seen. Bedrooms of the castle are stuffed with high-tech sensors which enable the guest to customize the rooms according to their wish, they can change the room’s climate and lightings. It even has an underwater music system. There are 10 bedrooms and 6 kitchens; this mansion is surely everything we need. It even has every bookworms paradise; it has a 2,100 square feet library.

The 11-acre manor house established in Woodside, California is home to Yuri Milner. The house cost of 100 million dollars and measures up to 30,000 square feet. Furthermore, it embodies 9 bedrooms and 5 bathrooms. The house was built in a way that resembles the French chateau. The mansions installation includes a wine cellar, ballroom, spa, tennis court, and pavilion. Well, there’s more to that it also has a library, a game room, and a theatre.

Woodside home is the house of Japan’s second-richest man Masayoshi Son. It out-spreads up to 9000 square feet including a swimming pool, tennis court, and attached library within it. The three-storeyed structure includes 4 bedrooms, 5 bathrooms, and 4 car garage. It is designed by Allan Greenberg. It offers a mind-boggling view of Woodside mountains. It also has a swimming pool and pool house to comfort its owners.

Lost in Palm Beach Florida, this luxurious home is surely a dream for all the beach lovers. The house was originally owned by Donald Trump but now belongs to Russian Tycoon Dimitry Rybolovlev. The villa comprises 18 bedrooms, 22 bathrooms, guest cottages, tennis rooms, ballroom, and C- sea waterfront. The prerequisites of the villa include a media room, art gallery, bathrooms studded with gold and diamonds, kitchen fabricated with mahogany furniture, and a massive garage made to fit in about 50 cars. The awe-inspiring villa is constructed with the help of thin bulletproof hurricane windows.

Located in Montecito California 50 million-dollar villa is owned by Oprah Winfrey. It extends up to 30 acres and incorporates 6 bedrooms, 10 fireplaces, 14 bathrooms, and indoor as well as outdoor theatre within it. Moreover, it also has a wine cellar, guest house with pool, and tea house. The overwhelming landscape encompasses a Rose garden, terraces, and fountains. The kitchen is the heart of the manor.

The 45 million dollar penthouse that are extremely spacious. The lobby is beautifully decorated with fine English oak, panels, and marble columns. The premise offers the owners various leisure facilities like private restaurants, health clubs with private massage rooms, and yoga centers. It is said to be the biggest budget house in Manhattan.