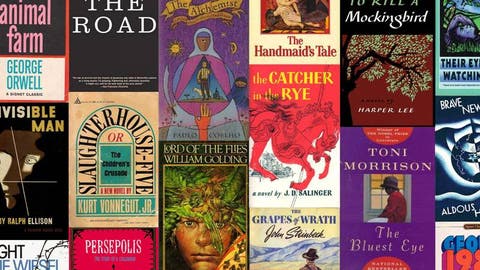 Classic literature made a soft spot in everyone’s hearts with its timeless and articulate writing, making it unique in the literary world. Here is a list of classic novels that have been considered as the greatest works of literature ever written.

People interested in reading classic novels must involve Anna Karenina on their bookshelves. Russian novelist Leo Tolstoy, who moulds together thoughtful discussions on love, pain, and family in Russian society wrote this. The novel was revolutionary in its treatment of women, depicting prejudices, and social hardships of the time with vivid emotions.

2. To Kill A Mockingbird

Harper Lee, one of the most influential authors in the literary world, famously published her beloved Pultizer Prize-winning masterpiece, To Kill A Mockingbird in 1961 which became an immediate classic of literature. The novel examines ‘racism’ through the innocent eyes of a clever young girl Jean Louise Finch.

F. Scott Fitzgerald’s The Great Gatsby is categorized as one of the greatest texts for introducing students to the art of reading literature critically. The novel is recited from the perspective of a young man named Nick Carraway who has recently moved to New York City. He is befriended by his eccentric nouveau rich neighbor with mysterious origins, Jay Gatsby. The book provides the insider’s look into the Jazz Age of the 1920s in US history while at the same time critiquing the idea of ‘American Dream’.

4. One Hundred Years Of Solitude

The late Columbian author, Gabriel Garcia Marquez published his most triumphant work, One Hundred Years of Solitude, Nobel Prize winner in 1982. Marquez employs the power of myth and folktale in relating the history and Latin American culture. The genre of magic realism emphasizes the extraordinary of commonplace things while mystical things are shown to be common.

5. A Passage To India

After the multiple excursions to the country throughout his early life, Forster wrote his novel, A Passage to India. The novel’s rich descriptions of nature, the landscape of India, and the figurative power that they are given within the text solidify it as a great work of fiction. The possibility of friendship and connection between English and Indian people, despite their cultural differences and imperial tensions, in the conflict.

Ralph Ellison’s Invisible Man is a groundbreaking novel in the expression of identity of the African-American male. The protagonist of the novel, who is never named but believes he is “invisible” to others socially, faces extreme adversity and discrimination, falling into and out of work, and relationships. The novel is known for its surreal and experimental style of writing that explores the symbolism surrounding African-American identity and culture.

The most influential and well-known work of Spanish literature, published in 1615, it tells a story of a man who takes the name “Don Quixote de la Mancha” and sets off in a fit of obsession over romantic novels that hail chivalry to revive the custom and become a hero himself. The character, Don Quixote has become an idol, influencing many major works of art, music, and literature. The text has been so influential that the word Quixote was created to describe someone who is “foolishly impractical, especially in the pursuit of ideals”.

Toni Morrison’s spiritual and haunting novel Beloved deals with the story of an escaped slave named ‘Sethe’. The novel inspects the trauma of slavery even after freedom has been gained, depicting Sethe’s guilt and emotional pain after having killed her own child, whom she named Beloved, to keep her from living the fate of a slave. The novel was lauded for addressing the psychological effects of slavery and the importance of family and community in healing.

Possibly the most idiosyncratic book of this list, Woolf’s Mrs. Dalloway describes exactly one day in the life of a British socialite named ‘Clarissa Dalloway’ through the stream of consciousness technique. The novel’s unique style, subject, and time setting make it one of the most respected and regarded works of all time. It deals with constant regrets and thoughts of the past, struggles with mental illness, and post-traumatic stress from WWI.

Charlotte Bronte’s Jane Eyre, a novel which is assigned for reading in schools, was initially published under the pseudonym of Currer Bell to disguise the fact that the writer was a woman. At the time when the author felt compelled to hide her true identity, Jane Eyre provided a story of individualism for women. The work combines the themes from Gothic and Victorian literature, revolutionizing the art of the novel.

The western canon of “great literature” often focuses on writers who come from North America or Europe, neatly excluding writers from third world countries. Chinua Achebe’s Things Fall Apart is one such work of African literature. The novel follows an Igbo man Okonkwo, describing his family and the effects of British colonialism on his native country. The novel is an example of post-colonial African literature, a genre that has grown and entrenched itself as valuable since the mid-1900s.

The Pulitzer Prize and National Award-winning novel The Color Purple by Alice Walker, set in post-Civil War follows a young African-American girl named Celie into adulthood in letters she writes to God and to her sister. Celie encounters the sexual abuse by her father and eventually her husband. The novel explores the themes of sexism, racism, gender, sexual orientation, and damaged characters who, over time, grow to shape their own lives.

A Tale of Two Cities is a historical novel which narrates the tale of French Doctor Manette in London and Paris, before and during the French Revolution. The novel interweaves the political and personal events. The novel involves the sacrifice of Sydney Carton on behalf of his friends. The novel depicts the contrast between the peaceful city of London and the city of Paris, tearing itself apart in the revolution.

If you are seeking for the spice of ‘love and revenge’ then you need to grip this novel ASAP. Wuthering Heights by Emily Bronte is not a story about niceties and upper-class propriety, this is the tale of people who aren’t socially acceptable. This novel is for those who can appreciate the unlikeable characters. It is a dark novel which deals with very complicated individuals.

This is another dark novel in which a single sinful act ruins the lives of three people. The story is set in 17th century Massachusetts among Hawthorne’s puritan ancestors. In The Scarlet Letter, he highlights their weaknesses and their strengths. In all actuality, the book has much more than that as the author is on a journey himself.