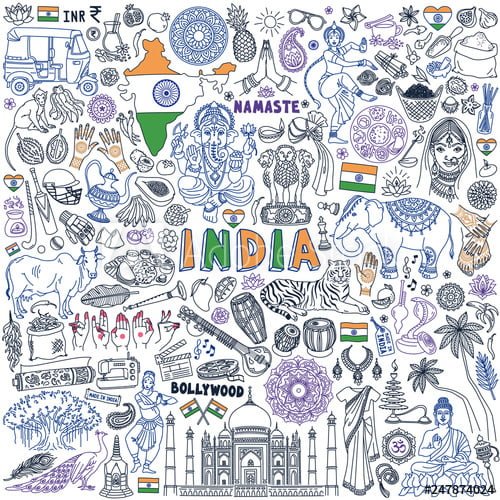 India is rightly called an example of unity in diversity. It’s one of the most diverse nations in the world with around more than 100 languages and with over 6 major religions across the country. Yet we face a variety of stereotypical allegations against us from around the world.

1. Everyone living in India is a Hindu

India is a secular state i.e. India has no state religion. There are Hindus, Islam, Christians, Sikhs, Buddhists, Jains living in the same country peacefully. Although a major part of the country is dominated by Hinduism but alongside all the other religions live in peace and harmony. Christmas is celebrated by a Christian and a Hindu, while Biryani and Kheer are the most delicious meals prepared in the kitchens of every Muslim household during Eid and Ramadan, all Sikh Christian and Muslim friends/family are welcome. ‘The more the merrier’ phrase is truly applied during the festive season. The conclusion being, India is a land where we live together in harmony. Small groups are never treated as a minority when it comes to having each other’s back.

3. Everyone is a vegetarian

We do have some amazing chicken, fish and prawn recipes that are extra spicy or mild, depending on how much your taste buds can handle. Indians love non-veg. Cow meat, i.e., beef is banned in India as the cow is considered a holy animal and we worship the cow in the Hindu culture. She’s given the importance of a mother. The conclusion being, not all Indians prefer non-veg but it’s not like everyone is a vegetarian. It is an individual’s choice of what he/she prefers to consume.

4. All Indian cuisines are spicy

India is known as the land of spices. Our spices are unique in their own way, Every region has its own unique procedure of making spices. Yes, it differs from region to region. Not all cuisines are spicy, we have a variety. We offer Gujrati style sweet dal as well as spicy daal Tadka. A basic dish of dal with a high amount of protein is cooked in various styles in different cuisines, there are a number of dishes which are prepared depending on the individual’s taste.

5. All Indians are born Mathematicians

We are the land where Aryabhata invented the digit 0. Zero holds great value in our everyday life. We are indeed a land of great mathematicians who have made our country proud and continue to encourage the upcoming young mathematicians. People all around the world believe that all Indians are great at math, it’s not something which we are born with. It’s yet another misconception. We are just normal people with a variety of likes and dislikes like any other country’s citizens.

6. Cricket is a National Sport

Indians fancy the sport of cricket. Some might call it even an emotion. We all know how intense the match is between India and Pakistan, every single Indian and Pakistani stays glued to the seat until the match gets over. No matter how much we love the sport. India doesn’t have a national sport for a particular reason. Culture is associated with India not having a National sport. It is difficult to pick one sport that has significance for all cultures. We have Kabaddi which is popular in the north, boat racing is popular in the south and football is popular in Bengal.

7. India is a land of arranged marriages

India is a land of traditions and cultures. We often come across various such traditions where an individual belonging to a certain community or caste should and must be married in the same community or caste. Today we still see such practices but on the other side, there are changes taking place slowly. And no, not all Indians have arranged marriages, we fall in love too and have a beautiful love marriage. Our culture sometimes does restricts us but love does find its path. Haven’t you heard the stories of Heer-Ranjha and Laila and Majnu, Bajirao Mastani?

8. India is hot and sweaty

India has diverse climatic conditions wherein the northern regions of Shimla, Manali and Kashmir have snowfall in winters. In the south, we have beautiful beaches with great summertime. The rain does create a lot of chaos in some parts of the country like Mawsynram is the wettest place in the world and is located in the northeastern part of India. India does have extreme climatic conditions in some states but it’s beautiful to witness them all.

In Hinduism, God is visualized through various forms of elements, plants, animals, celestial bodies, etc. We worship the four elements of the earth; animals such as cows, snakes, monkeys, and elephants. All these have a significant meaning to each one of us. Depending on one’s beliefs.

India is a land where many people have achieved soo much and have made their place in the world. Some people who made India proud are Mother Teresa, A. P. J. Abdul Kalam, R. K. Narayan, the list goes on and on. India has the best business schools. India has a large number of the illiterate population but there are schemes which are making an initiative to give most of the population a basic education in return for offering basic food and educational accessories. Change is taking place, it is slow but it’s still happening.

11. Indians have a funny accent

Almost every country has its own accent. It’s the way a language is being spoken and the speed and the tone. There are many things that matter when it comes to judging someone on the basis of their accent, not that one should be judged on the way he/she speaks. India is a country with various languages and the accent of each language is different. Even if it is just one language in a state but then as we go to another region in the state the accent changes the way they pronounce certain words or their speed changes the whole dynamics.

India is a developing nation and has achieved a lot during the process. With 119 billionaires, it ranked 6th among the world’s wealthiest countries for 2017 according to a report by New World Wealth.

This is very stereotypical. Indians living abroad have also achieved so much and have made Indians proud every single time. Sundar Pichai, the CEO of Google, is just one of those examples.

14. India is a land of snake charmers

Not anymore, they are almost extinct. We hardly have them around anymore.

15. Indian lifestyle is exactly how it’s shown in Bollywood movies

Indians love Bollywood, no matter how over-rated the movies are or how impossibly illogical the storyline is. We are rather practical people who are the majority of the middle class. We don’t dance around trees and on top of the mountains in real life. We live a normal life just like anyone else around the world.