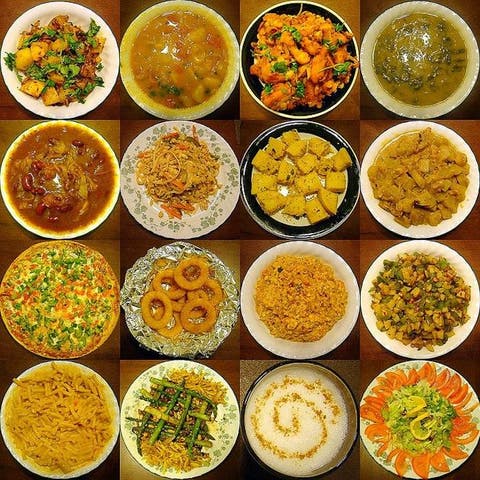 Top 15 Foods You Must Try While Visiting India

India and its foods are as diverse as its culture. The food tastes heavenly with its varied rangers of flavours and spices. Here are fifteen foods that you should try if you reside in India or are visiting the country:

It is one of the tastiest dishes that you’ll ever eat, the most sold in streets but you can also relish the taste in any Indian restaurant. It is a flour-based bread which is deep fried and served with spicy-tangy chickpeas. To increase the taste- chutney, pickle and onions are given on the side.

Now chaat is not one kind of food but is a type which consists of several different dishes. Chaat is spicy, tangy, sweet and all flavours mixed in one. Chaat is best savoured on the streets. It consists of pani puri, bhel, aloo tikki, dahi puri, ragda pattice, aloo chat and much more. The basic common ingredients are chutneys, potatoes, onions, masalas dried white peas(ragda) and round hollow puris.

Flour-based bread dipped in butter served with a mixture of vegetables in gravy, lemon, onions, pickle and chutney is what a plate of pav bhaji looks like. You can have it all year round but the real fun is to have hot pav bhaji in winters. Once you start earing, you won’t be able to stop!

The round batis(made up of wheat flour and is fried in ghee) with Panchkuti dal( consists of five types of dal) and churma( a sweet dish made up of batis, ghee and jaggery) is something you wouldn’t want to miss. It is the local dish of Rajasthan and is best to eat it in the State itself.

A very popular and mouthwatering Punjabi meal. It consists of flatbread made from the flour of maize(Makke ki roti) and vegetable curry which has mustard leaves and various other spices(Sarson ka saag). It is served with a side of cold and spicy buttermilk. A perfect afternoon lunch on a winter afternoon!

It is the most common south Indian breakfast on the streets of many places in India. Idly is steamed fermented rice cake and is given with sambar which is our vegetable stew or a vegetable curry. It is inexpensive, tasty and light- a proper breakfast!

Vada pav is the soul of Maharashtra. The dish is made up of deep fried potato dumpling or vada which is placed in between bread buns(pav). It is served with a side of two different kinds of chutney and green chillies.

Dhokla is prepared by steaming fermented mix of rice, chickpeas, spices and variety of Gujarati flavours. It is given with either tamarind chutney or mint chutney and green chillies. It is garnished with coriander or coconut.

Biryani is literally an all time favourite of the majority of the individuals. This is because there are approximately a hundred types of Biryani and every one of them tastes heavenly. Biryani is a combination of rice, spices, gravy and a variety of vegetables, meat or paneer. Hyderabadi and paneer biryani are two of the most famous types of Biryani.

Momos are dumplings made up of flour which is filled with vegetables(mostly cabbage) or paneer or any kind of meat(mostly chicken) and is served with red spicy chutney and mayonnaise. It is one of the best street foods that are available in India.

It is a thin pancake kind of structure made with the fermented batter of rice and white lentils. The dosa is filled with potatoes, chutney and spices. It is served with coconut chutney and sambar. It is a south Indian dish but is famous throughout the country.

Gajar ka halwa, Rasgulla, Jalebi and Gulab Jamun are the tastiest desserts you’ll ever taste. If you ever happen to visit India, don’t forget to eat their traditional sweets. They are served with different food elements but can also be eaten individually.

They are basically skewers of meat or paneer along with vegetables and are dipped with different sauces and spices. You can have your choice of kebab by selecting which meat or vegetable you want and what sauces you want it to be dipped in. they are healthy, inexpensive and can be found easily.

Rajma is basically prepared by boiling red kidney beans and is then bathed in tomato gravy which is filled with different kind of spices. This preparation is basically served with rice. It is enjoyed by most of the individuals and is again very common in winters.

Kulfi is an Indian version of popsicle or ice cream. It made from sweet thickened milk and is then flavoured with fruits, dry fruits, saffron or can be eaten plain. It is very rich in taste and will soothe your heart.