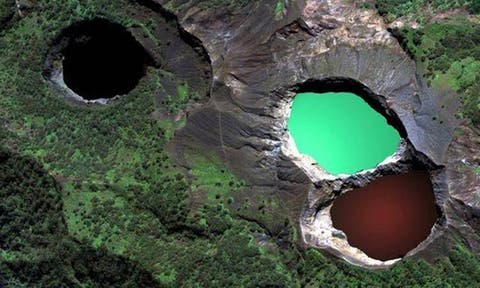 Top 15 Strange Places in and Around the World

In our day to day normal life, we have never ever thought

strange places this world could have or how much of this world we know about. So here, in this article, we would try to know about this world a little better which may surprise many of us.
Table of Contentsshow
11. Die Rakotzbruck
22. Spotted Lake Khiluk
33. Underwater Park
44. Eternal Flame Fall
55. Christ of the Abyss
66. Cano Cristales
77. Cave of Crystals
88. Crooked Forest
99. Great Blue Hole
1010. Bermuda Triangle
1111. Mt. Kelimutu
1212. Ruby Falls
1313. Danakil Depression
1414. The Seven Giants
1515. Cat Island

Die Rakotzbruck Or Devil bridge in Germany is said to be built around 150 years ago, back in 1860. It is built in a way that it made complete circle inspite of the location from wherever you see it, due to which people believe that it was not humanly possible to make such structures and it was built by “Satan”, which is why it is also known as the “Devil Bridge”.

The “khiluk” lake is located at Northwest of Osoyoos, British Columbia, Canada. This lake is one of the strange places around the world. This lake contains 365 separate pools in a mosaic- like pattern and each and every pool contains a different chemical which could be the cure of many diseases around the world.

Underwater Park is situated in Tragoess, Austria. It is strange and beautiful place at a same time. During every spring this park goes underwater and become the most adventurous place for divers. But this happens just because of natural phenomenon, as every year the snow of the mountains starts melting due to rising temperature and cause floods which engulfed the whole area along with this beautiful park which makes it the rarest and most beautiful phenomenon of the nature.

Eternal Flame falls is situated in Shale Creek Preserve, which is a section of Chestnut Ridge Park in Western New York. Surprisingly, a small part of this waterfall emits natural gas, which makes that small part to produce flames. This flame is visible all around the year, but it can be extinguished and can be re- lit too.

5. Christ of the Abyss

This is the 2.5 meters tall, bronze underwater statue of Jesus Christ which was made by Guido Galletti and it was restored in 2003 because of excessive corrosion. A hand which got detached due to corrosion was also replaced. Also the original copy of those statue is located in Mediterranean Sea, off San- frutthuoso between Camogli and Portofino. It is also one of the favourite places of divers and every year many divers just come to see the statue.

It is the Colombian River which is also known as “River of Five Colours” or “Liquid Rainbow”. Every year for a time period, the colour of this river turns red, yellow, blue, green, black and other shades in between. It all happens due to unique plants situated alongside the river and underwater spices of plants. It is also known as the most beautiful waterbody around the world.

Cave of crystals is situated in Mexico and it is the biggest natural chamber of crystals ever discovered. It was undiscovered till 21st century, when the miners discovered surprisingly big crystals and gypsum pillars. They are buried 984 ft. beneath the Sierra da Naica Mountain in Chihuahua. As per science, these crystals were developing since million years ago as many of the crystals are seriously are of size of pillars.

This is the biggest natural submarine sinkhole situated off the coast of Belize. The hole is 318m broad and 124m deep. The Great Blue Hole is the main attraction of world divers but it is also considered as the most dangerous place around the world as it takes life of many divers.

Bermuda Triangle or Devil’s Triangle is located in the region of Western Part of North Atlantic Ocean. It is considered as Devil’s Triangle as many ships and Airplanes were disappeared mysteriously and has never found. Many people believe the disappearances as Paranormal Activity or the activity of Extraterrestrial Beings. Even science cannot explains the mysterious disappearances and still researching the reasons.

Kelimutu is the volancano situated at the Flores island in Indonesia. But surprisingly this mountain has three volcanic Carter Lakes of three different colours that also changes it colour all the time. It is the strangest thing that anybody would know as these lakes colours are also explained in Indonesian cultures.

Ruby falls is 145 foot high underground waterfall located in Chattanooga, Tennessee in United States. It was undiscovered for many years and but was discovered by Leo Lambert when he started digging for it in 1928 and name it after his wife name “Ruby”.

Danakil Depression is one of the most hottest and driest places on the earth. It is located in the Afar Region of Northeast Ethiopia. It is so hot that it has various lava lakes and hydrothermal fields in it. The Afar Depression is slowly pulled apart 1-2cm every year and creating a new crust, which cause the rising of lava as the floor of the Afar Depression is made up of ballistic lava.

The Seven Giants are located in Ural mountains in Russia. It contains seven giant rocks having height of 30-42 metres created by frost and snow many years ago. These are also known as the “seven strong men” of Russia. In giant rocks, one pillar stands apart from other six and this phenomenon is considered as sacred by the locals and climbing on the rocks is believed as sin as per locals.

Cat island is an island of Japan where there are large number of cats as compared to humans. The ratio of cats and humans is 6: 1 which makes it strange in a unique sense.