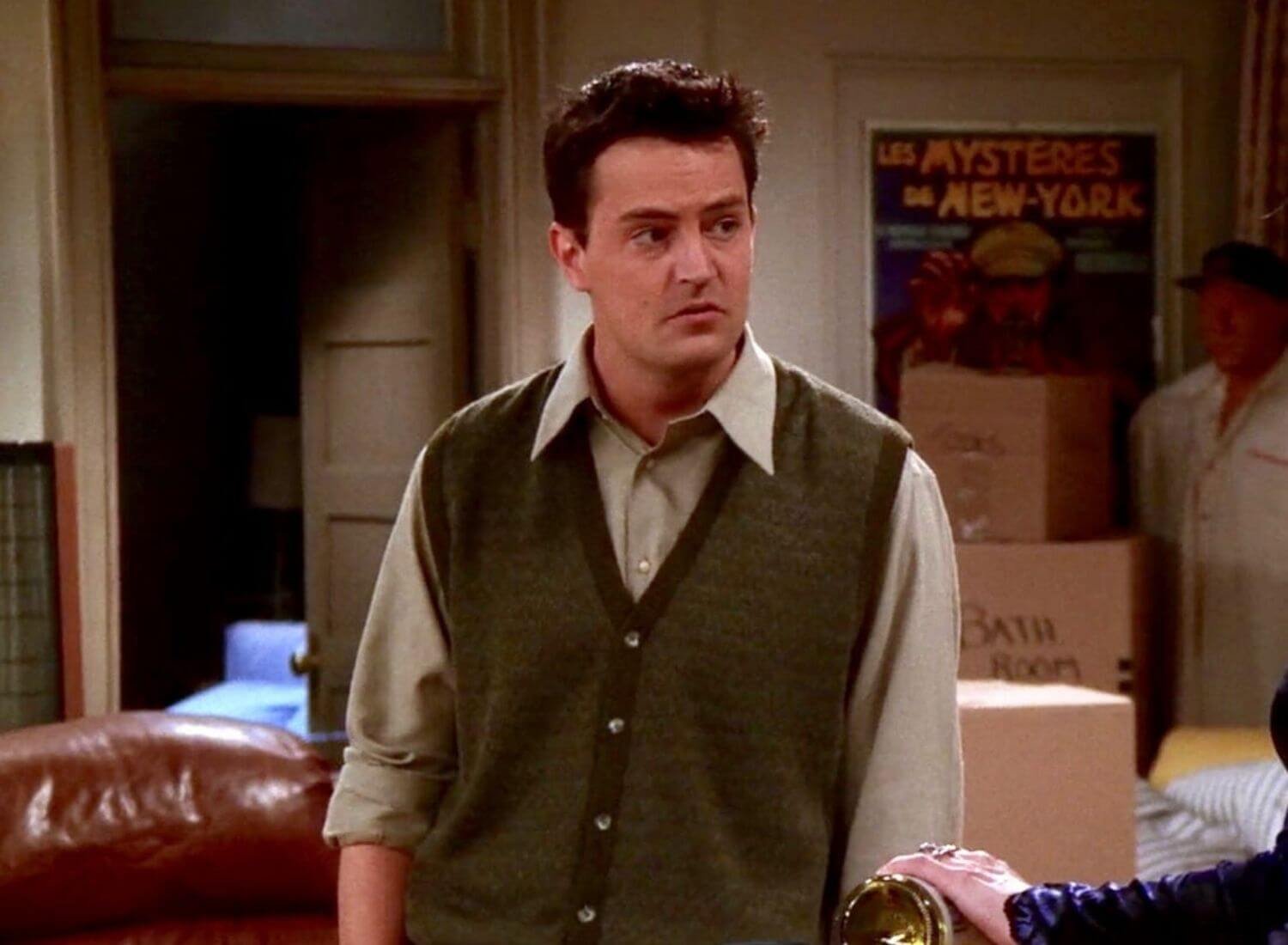 Top 15 Times When Chandler Bing Was At His Sarcastic Best

It’s been almost three decades since Friends came out and people of all age groups have connected to it all through this time. People who’ve watched the show know that Monica’s apartment feels like home and all the characters seem real and close. All six main characters have different traits and styles but are equally entertaining. One such character is Chandler, who has the weakness of coping up with uncomfortable situations using sarcasm and bad jokes.

Now, sarcasm is something that not everyone can use as comfortably but for Chandler, it comes naturally. He can be sarcastic towards a person, a situation, time, himself, and literally any damn possible thing present around him.

Let’s see when Chandler Bing was at his sarcastic best.

This was Chandler being sarcastic about the timing of a happening. Just as Ross wishes that he wanted to marry again, a girl (Rachel) enters the coffee house in a wedding gown. And Chandler as a result wished, “ and I want a million dollars.”

When Phoebe tells that one of her massage clients died at her massage table, Chandler comes in with the comment, “That’s a little more relaxed than you want them to get.” This was directed towards Phoebe being a masseuse and the nature of her work.

People who have watched the sitcom know about Monica being overweight in her teenage. When watching a tape from Monica’s high school days, Joey exclaims about her weight and Monica tries to cover up with the reason that the camera adds ten pounds, to which Chandler asks her, “So how many cameras are actually on you?”

When Chandler sees Rachel dresses in this gown, he couldn’t control his sarcasm and told her, “I’m sorry, we don’t have your sheep.” Apparently, the comment is made because Rachel looks like a character from a primary school poem about sheep and basically like a shepherd.

When Frank Jr. Introduces her girlfriend to the group telling that she was her teacher and his girlfriend says that he was his best student before indulging in some serious kissing, Chandler ponders over, “If that doesn’t keep kids in school, what will?”

When Monica and Rachel try to lure the boys in trading back their apartment using Knicks game tickets, they try to make them jealous by asking what should be worn on a game. Chandler replies to this with the comment, Uh, a t-shirt that says, “I don’t belong here.”

This was when Ross enters the coffee house in a sad mood and complains about someone eating his sandwich at his job, Chandler comments about his serious complain by, “Well, what did the Police say?” with a totally panicky expression. It was him being sarcastic about Ross being overly dramatic about an issue this petty.

This was one of the cutest. Joey tries to scare Chandler by hiding in one of the boxes while Chandler was shifting in Monica’s apartment. It was fairly obvious to Chandler that Joey his hiding in the box because of his giggling that’s why when Joey jumps out of the box, Chandler says, “Oh my god, you almost gave me a heart attack.” Of course, Joey didn’t get the sarcasm because he is what he is.

9. “This was a successful marriage!?”

Ross hides the fact that he has not annulled his and Rachel’s marriage despite Rachel telling him to. When it comes to knowing Rachel, Ross defends this by saying that he was not able to face another failed marriage. On this, Chandler jumps in and asks him, “At what point did you think this was a successful marriage.” This was because they got married in Vegas when they were drunk.

Ross gave Chandler the task to keep Joey away from Emma’s nanny Molly, so when Chandler finds Joey leaving his apartment, Joey covers up by saying that he was just heading outside to reorganize his thoughts, Chandler asks him, “Your thoughts, plural?”. This one was easy to get as we all know Joey’s level of the brain.

When in Season 10, Ross comes in Monica’s apartment complaining about Mark and his intentions towards Rachel, Chandler exclaims, “Its seven years ago. My time machine works!” This was because the exact thing happened 7 years ago i.e., in Season 3.

Throughout the show, Chandler one way or another runs into his nasal ex Janice. So when this happened in Season 10 during him and Monica visiting their to-be house and Janice exclaims about the world being small, he expresses his helplessness by saying, “And yet I never run into Beyonce.”

When Ross goes to a place to get tanned referred to him by Monica, he accidentally gets extra (really extra) tanned. So when he returns, Chandler asks him what happened. To which he replies that he went to the tanning place that Monica suggested, Chandler asks him, “Was that place….THE SUN?”

Joey got an audition for a character aged 19 and the group tells him that he definitely doesn’t look 19. So, he dresses up and acts like a 19-year-old boy in front of Chandler, and at the end, asks him joyously, “Am I 19 or what?!”, to which Chandler replies, “On a scale from 1 to 10, 10 being the dumbest a person can look, you’re definitely 19.”

Throughout the show, there have been many moments of Chandler being completely ignored by the group. One such incident was when Monica and Mike engaged in a very long battle of table tennis Chandler complained about it by saying that they each have won a game, but for him, it’s been a year. He gets completely ignored for this comment by Monica, Mike, and Phoebe. He ponders sarcastically, “Should I use my invisibility to fight crime or for evil?”