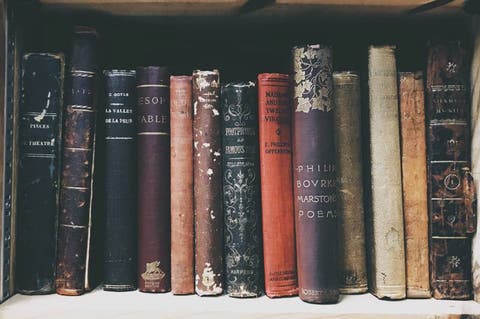 Top 15 Events In The History Of Literature

Literature is the living part of any culture. Without it, it would be living without oxygen. We learn from the past and shape our future accordingly. Literature is that guiding tool in shaping the future. Studying literature is learning history which renovated the cultural and political aspects of the world. Given below are the Top 15 events in the history of literature that shaped our future.

Written by Vyasa, Mahabharata is a narrative tale about the ferocious and sparring war between the Pandavas and the Kauravas on the solid land of Kurukshetra. Written originally in the Sanskrit language, this epic is deemed as the longest: ten times in length compared to Illiad and Odyssey ensemble by Homer. Mahabharata is a life lesson, which enlightens the reader on the political, philosophical, and devotional aspects. Every reader had found the aftermath of Mahabharata as horrid, execrable, and unendurable with persuasion on the righteous deeds.

Anyone interested in the mysteries will be appalled by this. Christopher Marlowe’s death was a mystery. Who did it? What was the motive? It is incomprehensible. Christopher Marlowe was a great Elizabethan writer and poet, who had contributed to English Renaissance theatre. He arrived for a drinking gathering with his friends at a certain lodge and never came out alive. It remained a heated discussion over the years. The motive behind his murder was his atheist propaganda in society. People speculated him to be a spy, or perhaps he faked his death, the conspiracy is still unresolved.

The dextrous Don Quixote of La Mancha stole the hearts swiftly. Miguel de Cervantes wrote this novel in Spanish originally in two parts in 1605 and 1615. It attracted many vociferous readers and established itself as a classic and the most influential novel in Western literature. His utilitarian squire, Sancho Panza, also his follower, became a paradigm of friendship. In its historical aspects, it addresses the real-life occurrences of Miguel de Cervantes. He was kidnapped and traded to the Muslim dominated territory, who were the enemies of Catholic Spain. This novel was a massive hit.

Shakespeare, revered as the “King of Romance” in modern times, contrived beautiful masterpieces in literature during his time. His famous works are still in parlances among people. Shakespeare published his sonnets in confluence in a quarto in 1609. Some of the sonnets are included in classic plays such as Romeo and Juliet, Henry V, etc. His sonnets that sprawled through Renaissance rebelled against the traditional rules. His sonnets delineate themes like love, lust, acrimony instead of the church’s doctrines. Shakespeare rebelled against the archaic literary tradition in a then unconventional way. As a result, it opened the door to new experiments in sonnets.

The novel was first published anonymously in french in 1678. France is grateful to Madame de La Fayette for writing the first historical novel in French literature. This gesture opened the door to diverse french fiction. ‎La Princesse de Clèves is the psychological journey of an ethical young woman who condemns herself from loving a young man. The naval-gazing approach of the language used by the writer emanates the feelings and thoughts of the characters, especially the lives of the nobles. This book was widely acclaimed by the readers. Many aspiring writers of the 18th-19th centuries took inspiration from this novel.

The English Writer John Bunyan wrote Pilgrim’s Progress in two parts in 1678 and 1684. He was unaware at that time his work will count as resplendent in the religious aspects. The story speaks of a man endeavouring pilgrimage through his life and serves as a religious allegory. England during that period was engulfed by the rituals of the church, and the church was at its supremacy. Bunyan was in prison when he conceived this idea of writing Pilgrim’s Progress. His idea was knocked out by his fellow friends. During these times, his novel proved to be reverberating with God and its belief.

Voltaire, born as François-Marie Arouet, was a french playwright, writer, and philosopher. He had borne the Enlightenment era of the 18th century. His seditious writings about the freedom of speech, freedom of religion, and liberal society had him exiled from France. He provoked Church’s archaic tenets with his satirical way of indoctrination. His exile was a beacon of political and religious equality, which was of least important then. His arrival signaled the Age of Enlightenment in the history of literature.

On the verge of bankruptcy, Defore produced a masterpiece of a lifetime, which ingrained his name as a successful literary author. Robinson Crusoe is a novel about the journey of the said man, who wishes to live a tumultuous life to avoid boredom. This journey brings him close to the divine power, God, and teaches him the values his father kept pestering him about constantly. In literature, Robinson Crusoe is considered to be a wanderer’s bible due to its religious allegory.

9. Samuel Johnson’s A Dictionary of the English Language (approx. 1755)

We are grateful to Oxford for introducing an English Dictionary. Otherwise, it would have been difficult and overwhelming to search for a word’s meaning. In extreme conditions, we might have had to take a trip to England for that. Fortunately, we don’t have to consider the latter. In retrospect, it was Samuel Johnson’s idea to gather all the English words into one place and to make it feasible for all races of humans to contemplate a word’s meaning and that of the subsequent texts. Therefore, this positive approach profited all people.

The British renumerated colonialism like an epidemic, bringing certain areas under their reign. Bengal was one of the territories which sought the change under the British Raj. Bengal (Bengali) Renaissance began approximately with Raja Ram Mohan Roy in 1775. It was a concomitant movement encompassing the cultural, social, artistic aspects in the Bengal region. People from different professions gathered together to educate and to enlighten people against orthodoxies like dowry system, caste and religion, sati, etc. This period of awakening abolished the unruly aspects of society, followed by a torrent of Bengali literature, starring scholars like Rabindranath Tagore, Saratchandra Chatterjee.

Thomas Jefferson wrote the American Declaration of Independence, and the Continental Congress adopted it on 4th July 1776, effecting the liberation of the American colonies from the tyrannical rule of the British Crown. The preamble from the Declaration embellishes the right to life, liberty, and the pursuit of happiness. It further sheds light on the equality between men and women. This day celebrates the rebirth of New America. This event proved to be a significant act in the course of freedom. Soon after, France also revolted against King Louis XVI of England, which started the chain reaction of attaining freedom. Presently, America is a formidable power in aspects of technology, warfare, and the world market.

Where the human race would be if not for Darwin’s theory of evolution? A human goes in search of its origin, its roots, to find the purpose of existence. Darwin has solved this enigmatic and complex question. He is known as the ‘father of evolutionary thinking’, and his literary theory of evolution is considered to be the most important discovery. His book ‘On the Origin of Species by Means of Natural Selection’ is termed as an important scientific book.

Hearty felicitations to the man who gave India its resplendent National Anthem ‘Jana Gana Mana’. It brings goosebumps to our skins every time we take in the words. Indian Literature is rich in his works. Starting from his first novel Gitanjali to inscribing India’s National Anthem, he has commemorated diverse hearts with his ardency and love in his writings. His being awarded a Nobel Prize was a proud and important event for India. It solidified India in its richness and ecstatic culture and proved India’s worth in literature.

Postmodernism abjures the meta-narratives and ideologies put forth by modernism. It talks about the total truth, science, cultural, art, architecture, and religious progress. The prominent scholars and leaders include Jean-Francois Lyotard, Jacques Derrida, and Fredric Jameson. Modernism demands of a single truth as the reality and subjugates the human race to believe God’s authority as the only ascendency. This kept the Church and the other religious authorities at supremacy. Postmodernism alters this ideology by attacking the assumed realities and embraces rationality as its core.

Imagine a world without yin and yang – Harry Potter and Voldemort! Imagine a world without magic! How odious and boring it will be? JK Rowling rebirthed urban fantasy from the stereotypical genres. Who would have thought this magical world will become the silent and hidden dream of every individual? JK Rowling did! She awakened all these dreams in her novels. A single and broke mother, the writer inside her did not peter out. Rejected by twelve Publishers, the series was a revolutionary hit of the decade.