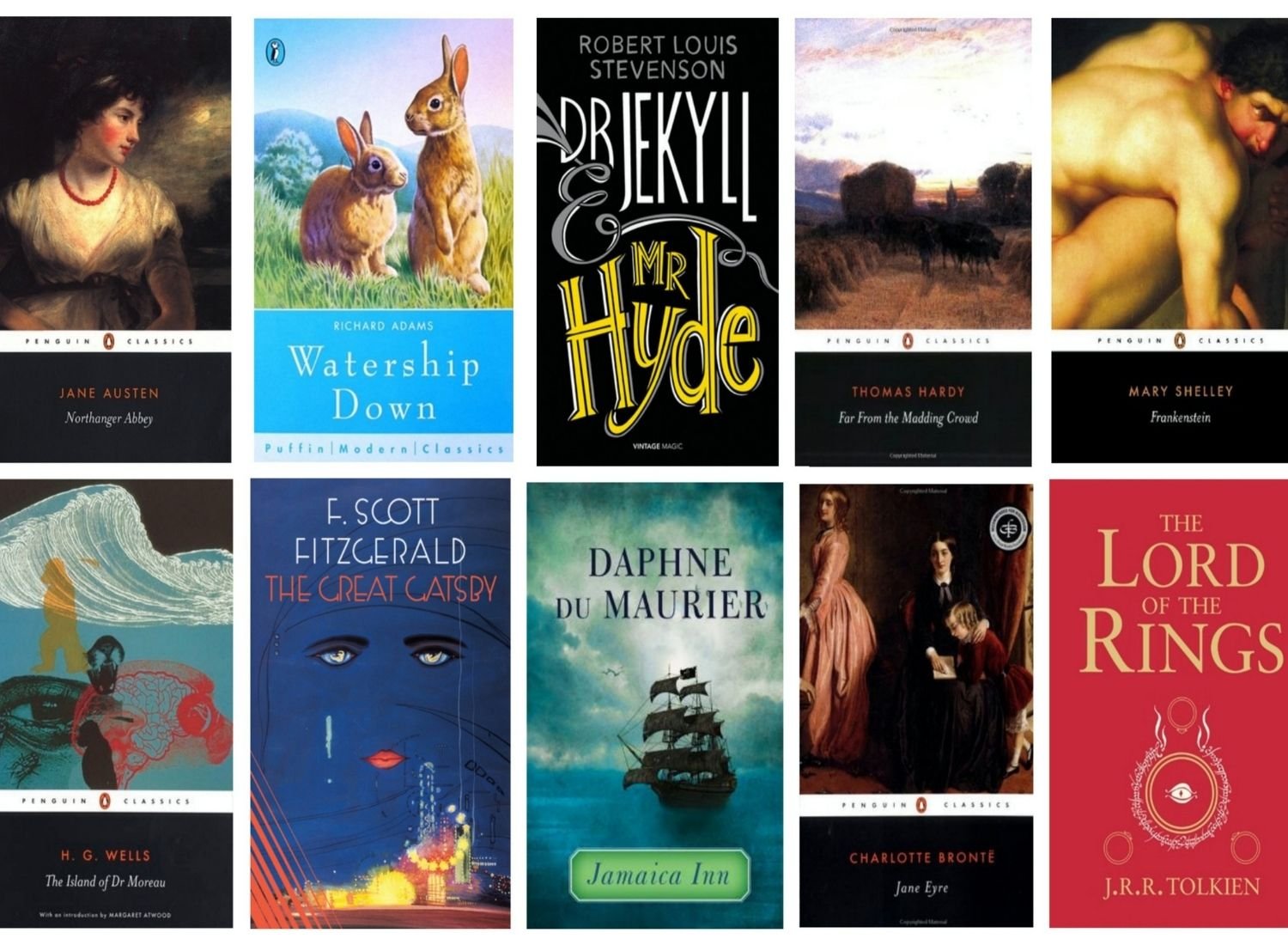 This list of classic novels is about those timeless books that you can enjoy alongside learning some lessons contained within the pages of these books. The main reason these novels are classic is that their themes and issues have been able to withstand the test of time. These novels also provide a keen insight into the collective minds of the periods in which they were written.

Table of Contentsshow
1Here Are The Greatest Classic Novels Of All Time:
1.11. Lord Of The Flies by William Golding
1.22. Pride And Prejudice by Jane Austen
1.33. Wuthering Heights by Emily Brontë
1.44. The Handmaid’s Tale by Margaret Atwood
1.55. To Kill A Mockingbird by Harper Lee
1.66. Crime & Punishment by Fyodor Dostoevsky
1.77. Hard Times by Charles Dickens
1.88. 1984 by George Orwell
1.99. The Picture Of Dorian Gray by Oscar Wilde
1.1010. The Mysterious Affair At Styles By Agatha Christie
1.1111. The Color Purple by Alice Walker
1.1212. The Mayor Of Casterbridge by Thomas Hardy
1.1313. The Book Thief by Markus Zusak
1.1414. Mrs. Dalloway by Virginia Woolf
1.1515. Frankenstein by Mary Shelley

Here Are The Greatest Classic Novels Of All Time:

1. Lord Of The Flies by William Golding

The book is dark and depressing. It centers on the aspect of a collapsing society and how humans tend to move away from humanity and towards savagery whenever civilization seems to be thrown out of the window. But what makes the story as compelling today as it was back then is that all these evil deeds are happening at the hands of children. The book is a good place to start your journey into reading classics if you are new to them.

2. Pride And Prejudice by Jane Austen

Everyone has heard about this one, but you should, even if you haven’t read it yet, even if you don’t like romance novels. The reason behind this is the time when it was written in was when women had no choice but to find a suitable match to secure a stable future. The novel deals with all of these serious issues, but at the same time, it is surprisingly witty, endearing, and funny.

This novel beautifully captures two psychologically complicated characters who may be totally unlikable but truly belong together. Emily Brontë applied an interesting technique of using multiple perspectives to tell the story, making the reader understand how society is the real story-teller of the two characters. We never really fully get inside the two main characters’ brains, which makes the classic novel a masterpiece. Despite everything, these two characters never fail to fascinate the readers.

4. The Handmaid’s Tale by Margaret Atwood

The story is about a dystopian land where the Republic of Gilead takes over the entire region under its command and belts out the most intense treatment, especially towards women. They are expected to do nothing other than breed and live to serve the men in society’s upper circle. Without even a name of their own, the women are labeled as handmaids and have to live through harassment and fear, not knowing where they will end up someday.

We travel through the story from the perspective of one of the handmaids named Offred through her struggles and yearning for liberty or the urge to break off the chains. The story is captivating, suffocating, and yet meaningful. When you consider the dictatorship reflected in the story, you understand that this book was published (1983) to the current times, the circumstances at large are still the same— the marginalization, the oppression, and the hunger for power in humans.

5. To Kill A Mockingbird by Harper Lee

This is a novel which talks about racism and its consequences. Scout and Jem are the children of Atticus Finch, a lawyer. He is fighting to get justice for Tom Robinson, a black man charged with the rape of a white girl. Finch fights hard to prove that the man is not guilty of the charge. Though it is tough to win a fight like that, Finch never gave up. He stood firm for what is right. Scout and Jem are playful kids; they grow to wonder about Arthur Boo Radley, a mysterious neighbor. Scout and Jem receive great words from their father about racism and discrimination.

Children grow seeing the elders. They follow them. Elders should be a role model for kids. Racism and discrimination should be avoided at any cost. Everyone should stand by the truth, no matter what. Humanity makes us and keeps us human. The humor in the novel is wonderful and, at the same time, makes us think about these issues.

Despite it being a bit over-described (as classics usually are), one would be constantly left amazed by Dostoevsky’s brilliant understanding of human nature and the artful way he dealt with the concepts dilemmas of morality and “punishment” while weaving them around a gripping fiction. Dostoevsky provides no simple or easy answers for the readers.

Hard Times is a book set in the 1850s. Thomas Gradgrind, the father of five children, believes that life should move on only with facts, and there should be no place for emotions. He mocks everyone who lives by giving importance to emotions. The novel portrays the failure of a utilitarian society.

The story is set in Coketown, an industrious town, where the factories emit smoke and cover up the air with toxicity. The workers toil hard while the bosses live their life luxuriously. The characters are written really well; readers connect easily with most of them while hating the others.

Imagine yourself in a world where the state monitors everything you do. They apply a totalitarian system and regulate everything, including language, in the most extreme ways possible. You cannot express your thoughts through language because having individuality is nothing less than a punishable offense, often a fate worse than the death penalty.

A man who thinks for himself is doomed to fail. Hence, freedom is not good for society as a whole, but slavery is, while the inability to recognize these contradictions allows more authoritarian prowess to the party. As we enter the future of even more advanced technology, this purgatory vision seems to be a near possibility, making it even more haunting. Written brilliantly, some parts are frighteningly disturbing and hauntingly nightmarish.

9. The Picture Of Dorian Gray by Oscar Wilde

It is written in such a beautiful way, using such colorful and ornate language along with three amazing characters that make you question everything about art and artists. It is an investigation into the human soul, the power of vanity, and the problems of living a life with no consequences for any actions. The implicit homoerotic undertones make it a fascinating read. Dorian realized that physical beauty is finite, but as readers, we realize this story’s beauty is not.

10. The Mysterious Affair At Styles By Agatha Christie

When the rich and generous Emily Inglethorp suddenly dies after quarrels with her closest, it was undoubtedly murder! But how do you sieve through a houseful of suspects, all with motives to kill? Hercule Poirot, of course! Only Mr. Poirot could solve a murder with the strangest clues like a perfect bed of begonias, a shattered coffee cup, candle grease, and the weather. His little grey cells, along with his ‘little’ ideas, save the day as usual. This one was Agatha Christie’s debut novel: the first to feature Hercule Poirot.

11. The Color Purple by Alice Walker

The Color Purple gives us the vivid, wrenching portrayal of the harsh life of a young black girl, Celie, who is born in poverty and segregation. Celie’s story is told in epistolary style by herself. First of her letters are addressed to God and later to her sister, Nettie. She is repeatedly abused by her father as a child then by her husband and step-children as a growing woman. She lives this hard life, yet her heart is free from any bitterness, even in the face of darkness.

The Color Purple is about women’s deep and inspiring journey from abuse to independence and self-actualization. This novel is a winner of the Pulitzer Prize and the National Book Award.

12. The Mayor Of Casterbridge by Thomas Hardy

The novel centers on the absolute pitiable choices of Michael Henchard and how they affected him. This book is a perfect example of Hardy’s fluency over descriptive prose involving pastoral settings, the idea of progress, and its effect on the working man. Coincidences abound but always act as an agent of fate, which was Hardy’s God, and there is no escaping fate. There are twists around every corner of this book. He pushes us to feel pity for Michael Henchard when he essentially orchestrates his own downfall.

13. The Book Thief by Markus Zusak

It is a young German girl’s story during one of the most horrific times in history— World War II. This book is narrated by death! The narration is the first thing that makes this book a page-turner. People are separated from their loved ones, more bombs, more destruction, more death comes with war. The story is emotional and deep, and it’ll raise your empathy to a large extent.

Mrs. Dalloway’s mind is in real trouble. She insists on occupying it with the most trivial tasks, and yet it always has other plans. Under the everyday, mundane occupations of a London socialite’s life, this mind works at a surprising speed, connecting, assuming, imposing, observing, feeling but most importantly, doubting. Mrs. Dalloway’s mind is kind of rare in a way. It observes life from within, and it does so with the same curiosity and insecurity as if she had just reached her twenties.

Mrs. Dalloway’s mind has to “buy the flowers itself” and engage in petty conversations. It does so while contemplating and accepting maturity, death, and life’s immense beauty and sadness as only a few people could do. Mrs. Dalloway’s mind remolds London into a rich mental landscape that changes along with the quicksilver of her thoughts. Her mind is exceptional, but she doesn’t know, or rather, she chooses to ignore it. By any means, it is one of the most attractive minds portrayed in English Literature.

Written during the height of the Romantic movement, this book provides insight into issues that are quite pertinent today. There are so many thought-provoking ideas/themes that this book evokes. The novel plays on some of man’s most archetypal obsessions and the consequences when such aspirations are attained irresponsibly. It portrays the deep and ambiguous human longing to be a Rebel/God through Victor’s presumption in displacing God and subsequently failing to nurture his creation.

The novel is filled with analogies between characters and other figures from literature, myths, and allusions to other texts, e.g., the myth of Prometheus, Milton’s Paradise Lost,and to a lesser degree, Coleridge’s The Rime of the Ancient Mariner.

Everyone has different tastes and interests, but these classics help you develop your taste in literature and understand your preferences better. Some of these are hard to read, but not all of them are hard so give it a try! Moreover, let us know in the comments section about your favorite classic novel.