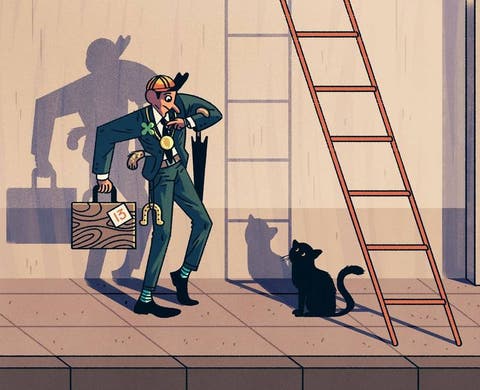 TOP 15 Strange Superstitions Around The Globe

Have you ever been restricted from shaking your legs by your mother? Or have been stopped while walking when a cat crosses your path? We all are surrounded by different and strange superstitions with different stories varying from country to country. Why do people believe in superstition? It makes us question, but these superstitions given below are a part of the culture and lifestyle of people, and we cannot ignore it.

1. Placing Mirrors Opposite Each Other

In Mexico, keeping mirrors opposite to each other is an open call to the devil. It is believed that the infinite reflection of the mirror on each other generates bad vibes and evil energies.

In the UK and Europe, it is forbidden to whistle at home. They believe, whistling at home invites evil spirits and bad omen. Whistling at home calls bad luck as well as death. According to their beliefs, whistling can make them suffer financial loss and attack of cockroaches at home.

3. Not to Make Toast With Water

According to German mythology, proposing a toast to somebody with water is similar to hoping bad luck or even death on him or her. Also besides wishing death on a guest and yourself, cheers with water can even provoke the wrath of Gods.

4. Placing Shoes On The Table

It is believed that placing shoes on a table is a symbol of death. In Britain, it’s forbidden to keep someone’s shoes on the table as it signifies the person’s death or bad luck. This action can also provoke a quarrel with a loved one or even can make someone lose his or her job.

It might seem unlucky to us, but in France, stepping on dog’s poop is actually a good omen. If you stepped on the poop from your left foot means good luck, whereas stepping from your right foot is a bad fortune.

If a bird poop’s on a person, it is believed to be good luck to them. It is believed that as the bird follows the man to poop, similarly the good fortune is following him or her to shower blessings. The fortune highly steers towards wealth.

A local belief of people who stay in Iceland is that if one knits outside the house, there’s a high chance of the winter to prolong. In many countries, pregnant women are forbidden to knit for their babies before they are born. Even handling a needle to a friend can break the relationship, they believe.

9. Not To Chew Gum At Night

In Turkey, chewing gums should not be chewed at night. It is believed that people who chew gum at night are chewing the flesh of deceased bodies. In America, if a guy gives chewing gum to a girl, the girl is believed to stay by his side forever.

10. Do Not Drop Purse On The Floor

Brazilians believe that if they drop their purse or wallet on the floor, then they can get penniless or can be cursed financially. Not only in Brazil, but also in some other countries like India, it is said to not to drop things like purse, money, or any other stationery, as they all are representatives of Indian goddess(goddess of wealth, goddess of knowledge, etc.).

In many countries, living creatures or animals like black cats, black dogs, bats, rats, etc. It is believed that if a black cat crosses your path, it’s a bad omen or if a cat mourns beside or outside your house then it’s a sign that someone close to you is going to die. Rats are too a bad omen if they are black in colour, though white rats are a good omen.

The most common superstition in South Korea. Koreans believe that if they sleep with the electric fans on with unopened or no windows in the room, then they can die. This superstition is also applicable to air conditioners. Koreans has a list of weird superstitions like not writing their names with red ink, or else they’ll die.

Any coincidence of thinking or speech makes us do touch the wood. If two persons think or say the same thing together, they say “Touchwood” by touching the wood. It also wards off evil spirits.

14. Do Not Declare Your Last Drink

This superstition is something we have never thought of, but in Cuba, it is believed that if one says “El ultimo” or tells about his or her last drink, then the person is tempting his or her fate and eventually inviting death soon. It’s a most common superstition believed there.

15. Enter With Your Right Foot